Robbie Williams got the AFL Grand Final off to an exciting start with an electrifying pre-match performance on Saturday at the MCG.

The English pop star opened with his 1997 hit Let Me Entertain You, before launching into Rock DJ.

However, the most incredible moment of the performance was his rendition of the ballad Angels, which he dedicated to late cricket legend Shane Warne. 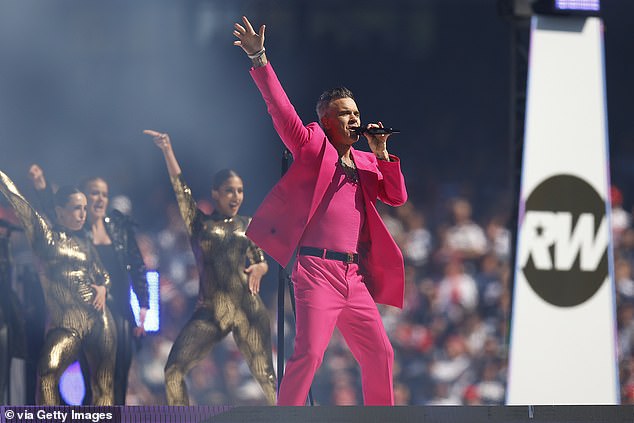 He then paid tribute to John Farnham with a heartfelt performance of The Voice, which had the whole crowd singing along in unison.

Robbie donned a hot pink ensemble from head-to-toe and whipped the crowd into an energetic frenzy throughout the incredible set.

He was surrounded by backup dancers in tight gold bodysuits and silver spacesuits, along with a live band.

He also performed one of his new songs, titled Lost, joking to the crowd that ‘we’ll get through it together’ since many in the audience most likely didn’t know the tune.

Robbie then ‘got back to the hits’ with an emotional rendition of Feel.

Robbie teased a potential reunion between himself Kylie Minogue a few weeks ago when asked by Fox Melbourne.

‘I need to ask her,’ he said cheekily. ‘Maybe I should do that on this radio show right here, right now. Kylie, please come and sing with me. I’d love it if you did.’

If Kylie doesn’t take the stage, Delta Goodrem has her tick of approval to perform in her place.

On Friday, the Spinning Around hitmaker commented on Delta’s Instagram page before their performance of Kids.

‘You kids are gonna be more than alright!!!! Have the best time!!!’ Kylie wrote on a photo of Delta and Robbie on the field of the MCG. 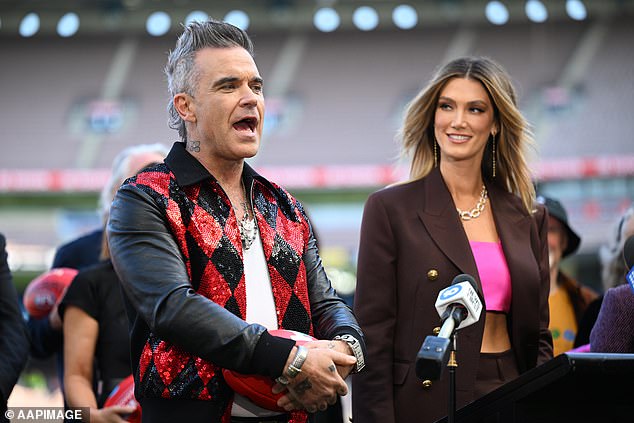