Rocket Lab is a U.S.-based company, but until now the bulk of its activities have been conducted in New Zealand. While the company has been public about its plans to expand to both hemispheres for a while, executives released a slew of updates on Wednesday detailing their goal to make the U.S. home to even a greater share of launches, testing and manufacturing.

The company shared the news with investors and the general public during Rocket Lab’s Investor Day. While the event livestream hit a technical snafu, Rocket Lab shared all the updates in a long tweet thread concurrent with the event (read it here). Here are a few of the biggest takeaways.

Before the Investor Day event even began, Rocket Lab kicked off Wednesday morning with news: It will test the Neutron rocket’s Archimedes engines at NASA’s Stennis Space Center in Mississippi. The company secured a 10-year lease for an Archimedes Test Complex at the center, with an option to extend the lease for another 10 years. The company also secured a non-disclosed amount of capital investment from the Mississippi Development Authority to further build out infrastructure for Neutron’s reusable engines.

This one likely isn’t too much of a surprise. Many companies have conducted engine tests at Stennis in the past, including SpaceX for its Raptor engine and Relativity Space for its Aeon engine. NASA has tons of infrastructure and test stands already in place for engine testing, so it’s sensible (not to mention economically wise) for a private company to secure space at the center. Rocket Lab will still have to build out the test complex, though, and that’s where the capital investment will come in handy.

Rocket Lab will also be bringing a substantial amount of investment and activity to Wallops Island, Virginia. The company announced way back in February that it had selected Wallops as the location for Neutron’s first launch site and manufacturing and operations facilities. Again, a sensible decision: Wallops is also home to Rocket Lab’s Launch Complex 2, its site for Electron rocket launches.

Until now, the company has been vague at best about when an Electron might take off from the Virginia site. But now more: The company said it plans on conducting that first launch from LC-2 in December 2022, followed by a second mission just a few weeks later at the beginning of the new year.

Rocket Lab also provided a long-awaited update on Neutron. The latest rendering of Neutron looks slightly different to what we’ve seen before, though the general outline is the same as the previous rendering released at the end of last year. It definitely didn’t escape notice that the company included “interplanetary” on its list of mission profiles for the vehicle, either. 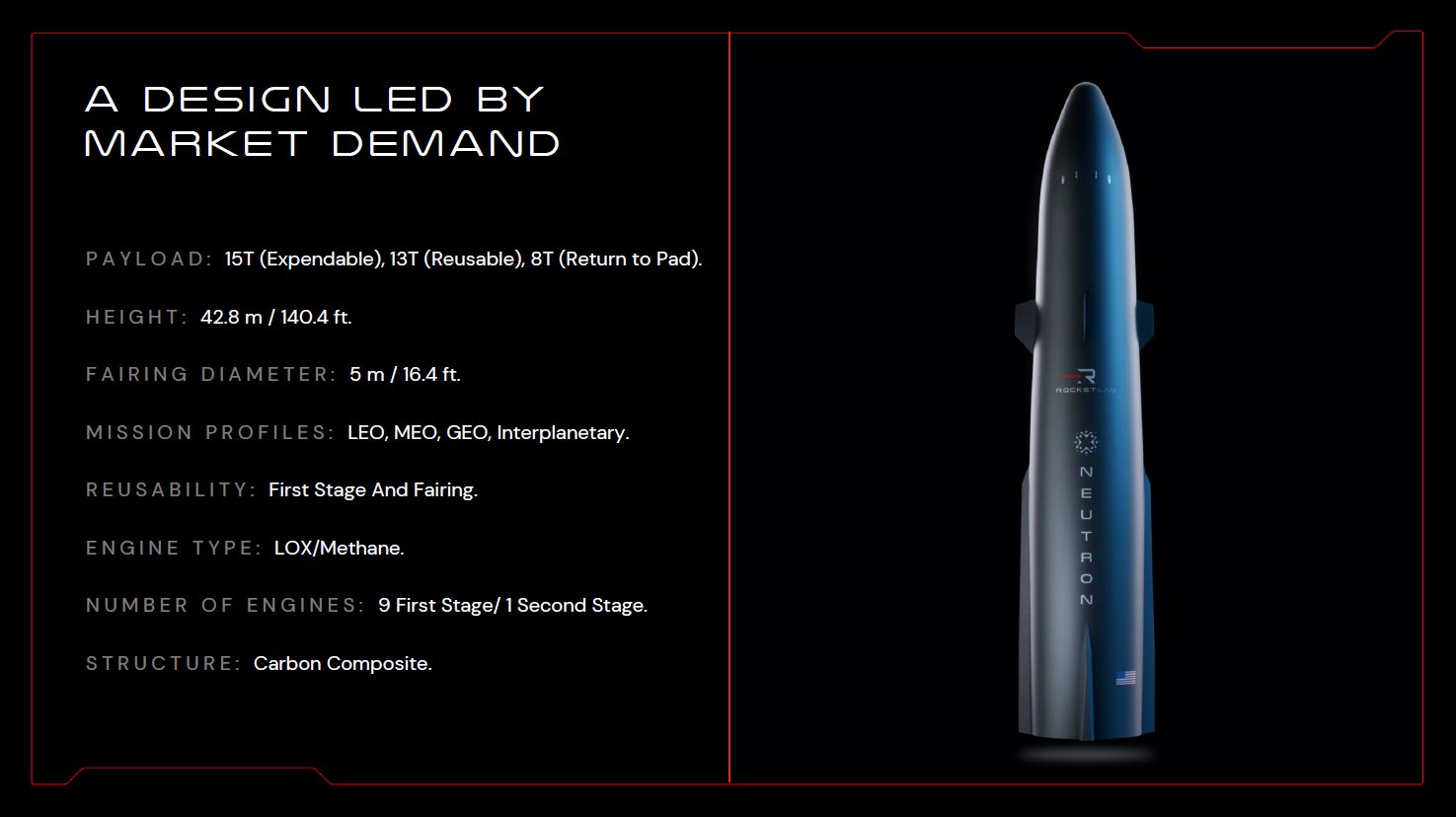 One big design change is in the fairing: We’ve known for a while that Neutron will have a fairing that doesn’t separate from the rocket during launch, but opens instead (Rocket Lab calls this fairing the “Hungry Hippo” for this reason). But instead of opening in four parts, the fairing will open in just two.

The company has made laudable progress, but there’s still much to go through the end of 2023, as they detailed during the presentation. But from the sounds of it, the company is proceeding as planned for the first Neutron launch sometime in 2024. 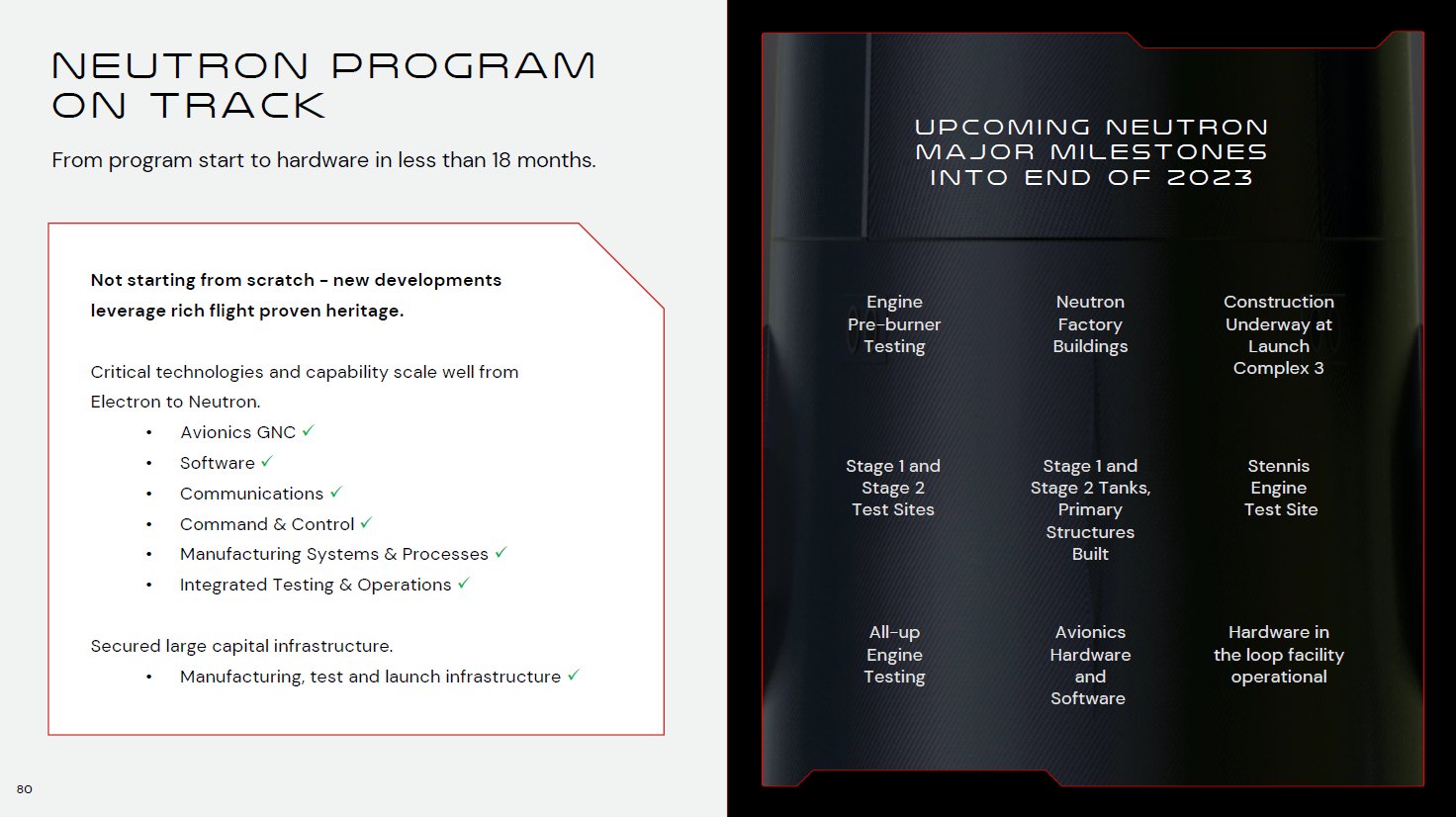