CCTV has captured the terrifying moment a car lost control and hurtled into a petrol bowser before the vehicle flipped and trapped the driver inside.

The man behind the wheel remains in a critical condition in hospital following the crash at an Ampol service station in Melbourne‘s southeast early Sunday morning which could have ended in disaster.

The hatchback can be seen in the footage speeding around a bend in Oakleigh South when it suddenly veers off the road and crashes into a metal barrier before hurtling towards the pumps.

The vehicle flipped several times and landed on its roof.

Miraculously, the 24-year driver managed to eventually crawl from the wreckage covered in blood, despite serious injuries.

Shocked residents woken by the crash revealed how the driver and his mother who rushed to the scene before emergency responders arrived had begged them to not to call police. 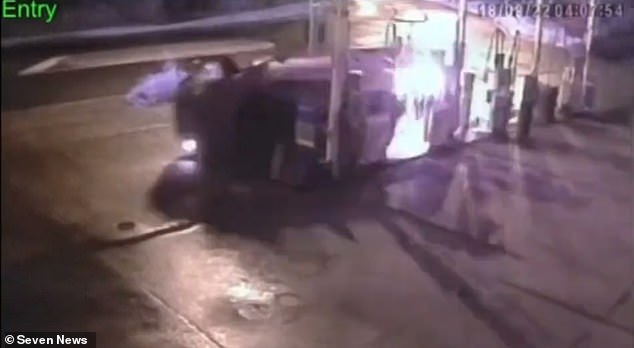 CCTV captured the moment a man lost control of his car and crashed into a petrol bowser, which could have ended in tragedy had the service station been open

‘It was a big bang, I’ve never seen such an accident in my life,’ Farzana Lucky told Nine News.

‘He was totally covered in blood, he was really badly injured.’

‘They were saying, ‘no police please, just ambulance.’

He was rushed to the Alfred Hospital with upper body injuries, where he remains in a critical but stable condition. He’s yet to speak to police.

His smashed-up hatchback was towed from the scene shortly afterwards.

The crash caused extensive damage to the petrol bowser, which contained a small amount of fuel but no power, which minimised the risk of an explosion.

Staff spent Sunday cleaning up debris strewn all over the scene.

It also took out the petrol station’s entire fuel system, which left the family business unable to operate for much of the day. 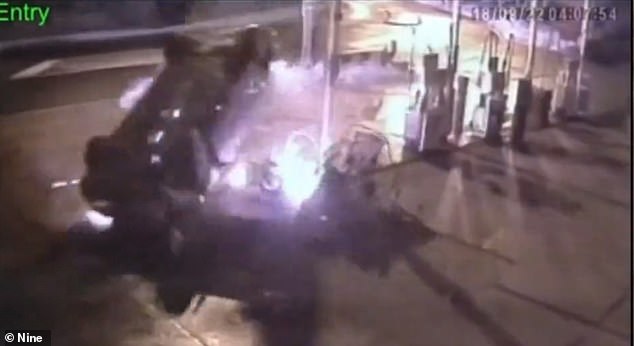 The hatchback flipped several times (pictured) before landing on its roof, forcing the bloodied and badly injured driver to crawl from the wreckage

‘It was very scary, the first thing I thought of was the safety of the person inside the car,’ owner Ahmad Dhemani said.

‘These pumps are very expensive, I was lost for words.’

The latest setback for the service station comes several weeks after the business was robbed by thieves who stole up to $10,000 worth of cigarettes.

Staff and neighbours are extremely grateful it petrol station was closed at the time and that the pumps were turned off.

‘The first thing I was thinking was ‘that could have been my home,’ Ms Lucky said. 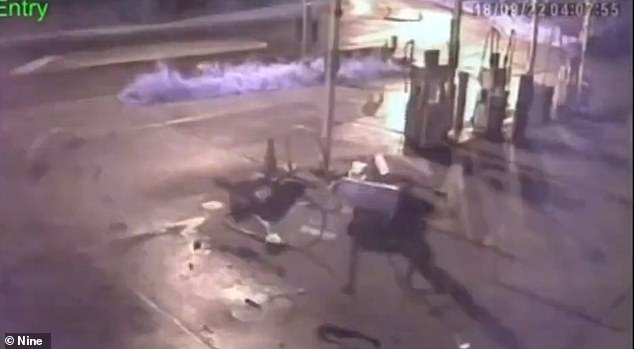 Mr Dhemani told Seven News: ‘Especially at night when this sort of accident happens when everyone’s sleeping and there’s a big fire, it would have been a big problem.’

Police confirmed it is investigating the single vehicle crash which occurred on Coora Road shortly after 4am on Sunday.

Separate CCTV 100 metres further up the road also captured a speeding car shortly before the crash.

Anyone who witnessed the crash or has CCTV or dash cam is urged to contact Crime Stoppers. 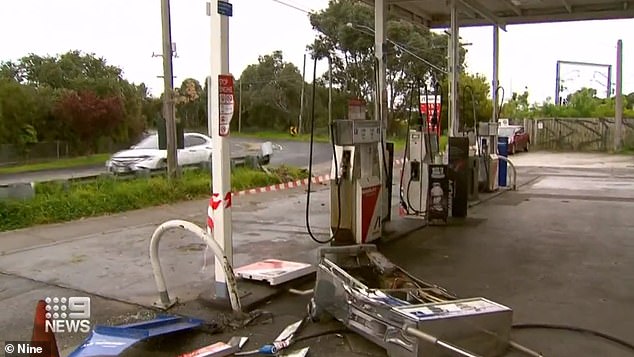